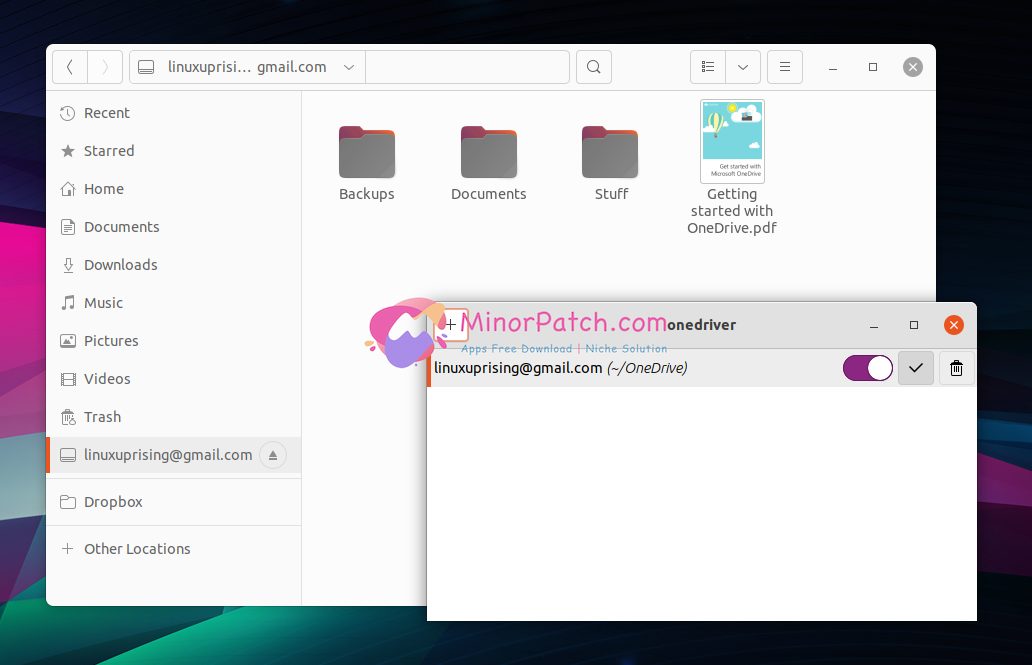 OneDriver is a native Linux filesystem for Microsoft OneDrive. The tool mounts OneDrive and then allows you to access it from your file manager and other applications as if the files were on your local hard disk.

Using OneDriver, the files are only downloaded when you open them. This means that if you have a lot of files in your Microsoft OneDrive, you don’t have to wait for all of them to be downloaded before using them, and you don’t need to use selective sync. Any modifications or new files you create in the OneDrive folder are automatically uploaded to Microsoft OneDrive (and vice versa).

It’s also important to note that files you’ve opened previously are available even if your computer is no longer connected to the Internet. However, for any files that you didn’t previously open, you’ll need an Internet connection to access them. The filesystem becomes read-only if you lose internet access, and automatically enables write access again when you reconnect to the internet.

Besides this, OneDriver supports multiple accounts, and it should (?) support OneDrive for Business / Office 365. I couldn’t find exact information on the latter, but looking at the bug reports, OneDriver should support both regular and OneDrive for Business / Office 365, though do note that I can’t test this since I only have a test personal account.

According to the developer, OneDriver is fast too, caching both filesystem metadata and file contents in memory and on disk.

Here it’s worth noting that the option to automatically mount OneDrive on startup doesn’t look like a standard option. You must click the checkmark to the right of the on/off toggle to enable automatic mounting on login (see screenshot at the top of the article). I don’t know about you, but I found this to be a bit confusing.

The new release also includes a new upload logic which fixes a race condition where software like LibreOffice, KeepassXC, or Krita could generate a 0-byte file instead of the intended file when the file was 4MB or larger.

Also, the tool now uses etags and modification times when syncing server-side changes back to the client, which reduces the number of times that files must be redownloaded because of bad timestamp data from the Microsoft API.

There are also some limitations / known issues that you should be aware when using OneDriver:

I should also mention that OneDriver works similarly to Rclone’s OneDrive mount option, with the only visible difference being that OneDriver comes with a GUI and is easier to set up. There might also be differences in performance, but I’m not a regular Microsoft OneDrive user, so I can’t say how they compare in this regard, so you’ll have to give it a try and find out for yourself.

If you prefer to use a sync client for Microsoft OneDrive on Linux (sync OneDrive with a local folder, having the files on t he disk after the sync is performed, and allowing access even when the computer is offline), instead of mounting OneDrive, check out OneDrive Free Client.


OneDriver is available in a COPR repository for Fedora 33, 34 and Rawhide, and Centos Stream 8.

For Ubuntu 20.04, OneDriver is available in a PPA. If you use Ubuntu 21.04, you can download and use the Ubuntu 20.04 DEB package from the PPA, as it should work with no issues.

For other Linux distributions, you can build it from source.